The Night I Danced with Madonna 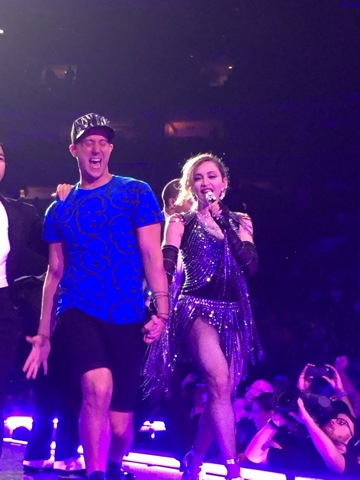 Last night in my hometown of Philadelphia, a lifelong dream of mine came true: I danced with Madonna onstage.

I'm still overwhelmed with joy and love and emotion, but here is an account of how my dream became a reality.

In the second to last song of Madonna's Rebel Heart Tour, "Unapologetic Bitch," a randomly selected fan is brought up onstage to dance with the Queen. I had heard that the fan is picked before the show begins, so by the time me and my BFF Jennifer had taken our seats and the show started, I assumed some lucky fan had already been selected. So I did what I always do at a Madonna: got ready to sing/dance/cheer for the next two hours.

And I did, because the show is amazing since 1) Madonna's Rebel Heart Tour is one of her great tours -- setlist-wise and spectacle-wise and 2) Jennifer and I were in the 4th row. There is nothing better than being close-up during a Madonna show.

It was during the end of the fourth-to-last song (Material Girl) that I felt a tap on my shoulder. I turned around and there was a woman with a headset and walkie-talkie and a crew shirt and she said "Would you come with me?"

I don't know how, but I INSTANTLY knew I had been picked to go onstage. I tapped Jennifer and said "I have to go. I'm going onstage!" Jennifer looked at me like I had two heads, but I didn't have time to explain.

Along the side of the arena the crew woman asked me if I would like go up onstage and dance with Madonna. I couldn't have said yes faster.

She walked me towards the back of the floor section where a co-worker was waiting. The two of them basically drilled me, asking if I was DEFINITELY going to dance and how I HAVE to dance really hard and Madonna is happier when the person dances a lot and how the girl at the last show didn't do anything and how I MUST dance my ass off. I looked at her point-blank and said "I've been waiting my entire life to do this. Trust me. I will dance."

They introduced me to the security guard, Lou, who was going to hold my stuff and escort me to and from the stage.

I stood there looking out at Madonna who was singing "La Vie En Rose" and suddenly the realization hit me that I'd be joining her up there in mere moments. A twinge of anxiety rushed through my body. What if I passed out?! What if I froze?!

But then I realized that this is something I've always wanted to do. That I've been dancing to Madonna for 30-years! I knew I could do this, a calm washed all over me.

The opening notes to "Unapologetic Bitch" began and Lou said it was time to go. I followed him from the back of the floor section around the crowd over to the left hand side of the catwalk by the heart-shaped stage. I was told to stand there and when the dancer comes over and gestures for me, to go up the stairs.

The entire event from here is captured on video (in multiple views):
https://youtu.be/Cdy24yiaCi8

From the moment I walked up the stairs onto the heart-shaped stage with her, life took on a surreal quality. It was as if I was doing something completely appropriate and natural -- dancing with a woman whose music and career I've loved for three decades -- but yet it seemed like a dream. Either way, I was having the time of my life. 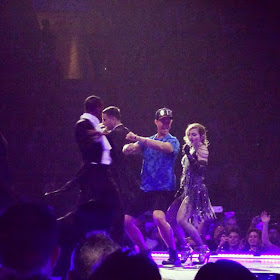 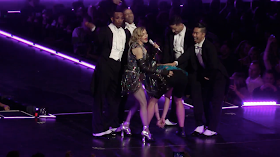 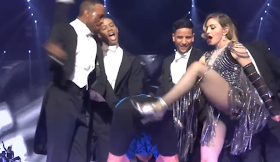 While walking down the catwalk towards the main stage, Madonna held my hand and was gazing into my eyes while singing. I was in awe. She looks absolutely beautiful. You can tell she is 57, but hot damn does she look amazing for her age. Seriously flawless. Staring into her crystal-clear blue eys and seeing her smile at you is otherworldly. 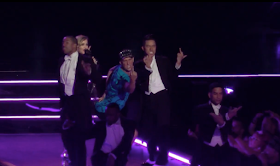 Then I was taken to the main stage and had to dance my solo, in front of Madonna, in front of 20,000 fans. I wanted to take in the moment of me being in that spotlight in front of all those people but I couldn't. I didn't care. Madonna was watching me dance and I just directed my energy towards her. 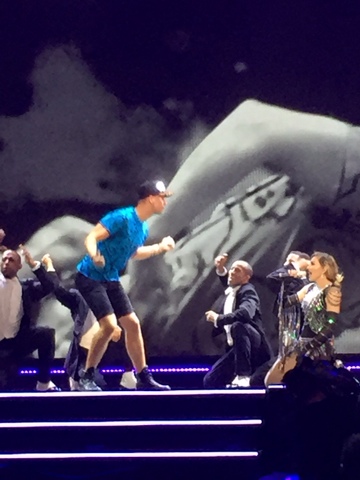 The song ended and she put her arm around me and told me I did a great job and asked me my name and I kept wanting to touch her, put my hand on her to recognize that it's real, that the moment is actually happening. 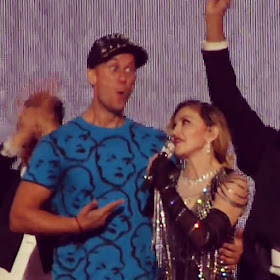 She asked me if I was nervous and I wanted to joke with her, so I said "no." Which she questioned and I answered the truth, that I was nervous as hell. I got my prize, the banana, and I gotta say watching Madonna trace a banana down your body while talking and looking at you is a wonderful way to spend a Thursday night. 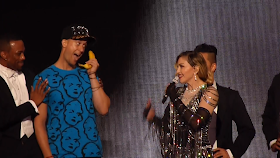 She said goodbye to me and waved me off and the hatch they positioned me over began to lower me down underneath the main stage. 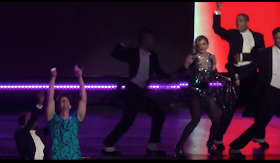 The dancer who accompanied me told me to watch my head since the stage is very low. I tried to take in as much of my surroundings as possible. To get a peak behind the curtain, to see backstage at a Madonna show is something I've never been able to see. It flew by me so quickly. And then there was Lou, standing with my bag and he escorted me back to the floor.

I didn't even know what had happened and suddenly everyone recognized me and began hugging me and telling me what a great job I had done.

I squeezed back into the row with Jennifer and we hugged and screamed in delight.

Madonna performed the last number (Holiday) and then the show was over. But my celebrity had only begun.

Every single person I passed was smiling and high-fiving and fist-bumping and shouting my name and telling me congrats and asking to take pictures. It was unreal.

Jennifer and I finally made our way out of the venue and a wave of emotion overtook me. Tears began welling up in my eyes and I felt beside myself. I couldn't believe -- I STILL cannot believe -- that I had just experienced that.

I boarded the subway and received a round of applause from everyone. More photos, more fist-bumps.

I laid in bed at my friends house that night trying to go to sleep but it just didn't happen. I was too excited. I still am.

To say it was one of the best nights of my life would be an understatement. I couldn't have asked for a better night. It truly was a dream come true.

So what now?! Well, now I can finally move on to fulfilling those other dreams I have. 😊 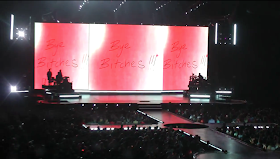